You are here: Home / Herpes virus / Herpesvirus family and diseases in humans

If you are interested in the answer to the question about how many herpes viruses are there, you will receive it in this article because the writing is dedicated to the herpesvirus family and the diseases that the family viruses cause in humans.

In this article you will know a member of herpesvirus family that causes a variety of diseases.

The word herpes is used in the name of several different but related entities.

First, it appears in the word herpesvirus which designates a family of viruses to which belong eight species that infect humans and some species of animals causing them different diseases.

We can use the phrase “herpes virus” instead of the word herpesvirus to designate the family.

Also the word herpes is used in the name of species and viruses of the family and diseases caused by some of them.

The article contains a first introductory section and I have dedicated a section to each of the eight species that affect humans.

The scientific name of the herpesvirus family is Herpesviridae. More than 100 species of it are known, eight of which infect humans.

The family Herpesviridae is classified into three subfamilies based on criteria that include genome organization and other attributes.

The viruses of the alpha subfamily have several common characteristics among which are having a relatively short cycle of replication, destruction of the infected cell and cause recurrent infections.

The viruses of this beta subfamily have the ability to cause persistent and latent infections as well as grow very slowly in cell cultures.

The viruses of this subfamily replicate and remain latent in the lymphocytes, that is, they are present in the blood of infected people.

Below I will describe each of the eight species of the herpesvirus family that infect humans.

This virus causes the disease known as herpes simplex, primarily in regions of the body above the waist. It is the main cause of cold sores and oral herpes.

Herpes simplex virus type 1 is also the major cause of herpes keratitis and herpes encephalitis.

This virus can also cause herpes on other parts of the body including the penis and vulva from oral sex.

Herpes simplex virus type 1 is transmitted by contact with blisters and sores from an outbreak and although it is very fragile to outdoor conditions, it can also be transmitted by hands and objects that have contact with an infected area of the body.

Herpes caused by this virus is treated with antiviral agents. The most effective are acyclovir, valacyclovir and famciclovir, which are marketed under the names Zovirax, Valtrex and Famvir, respectively.

There are alternative treatments for herpes that have very good results because they are designed to strengthen the patient’s immune system and prevent outbreaks without the adverse effects of antiviral agents.

Among the alternative treatments for herpes is the program created by Drs. Christine Buehler and Ken Languin, which they called HSV Eraser. You can access this protocol by clicking on the image. 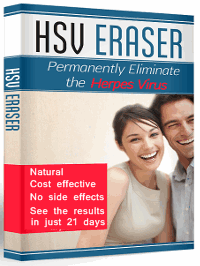 Herpes keratitis is a very dangerous vision disease that must be treated by an ophthalmologist. If you want to know about this condition click on the link.

I have also dedicated an article on this site to herpes encephalitis, which you may find very useful in expanding your knowledge of the diseases that the herpes simplex virus type 1 can cause.

There is no effective vaccine to create immunity against this virus.

Herpes simplex virus type 2 is the main cause of genital herpes and herpes in areas of the body near the genitals such as the buttocks and anus.

This virus can also cause herpes on parts of the body above the shoulders mainly due to oral sex, but less frequently than herpes simplex virus type 1.

The fundamental way of contagion of this virus is the intimate contact in the sexual relations during an outbreak or in moments of latency, although an outbreak is not present.

The virus can also be transmitted from mother to child if at the time of delivery the virus is active in the vagina.

Genital herpes opens the door to infection with other pathogens that cause sexually transmitted diseases, including HIV.

The function of the antiviral agents is to stop the growth of the viral population, but they do not eliminate the virus from the body and usually have significant adverse effects.

The HSV Eraser protocol by Drs. Christine Buehler and Ken Languin can also be used.

No vaccine is available to immunize against herpes simplex virus type 2.

The varicella zoster virus only affects humans and is the cause of two well-known diseases: chickenpox and shingles.

The first infection the virus causes is chickenpox. Once the host recovers from the disease, they do not suffer from it again if they are immunocompetent, but the virus remains latent in the dorsal root ganglia.

Under certain circumstances, the virus can reactivate and cause shingles or herpes zoster.

This disease occurs because the virus travels along the nerve to the skin causing blisters that may be preceded by itching, tingling, numbness or local pain.

Shingles is less prevalent than chickenpox because the number of cases ranges from 2.08 to 6.20 per 1000 people per year. The number tends to grow due to increased life expectancy.

The varicella zoster virus is highly contagious. It is transmitted from person to person through contact with the mucous membranes of the upper respiratory tract, conjunctiva, chickenpox lesions, and the blisters and sores of a shingles outbreak.

A person with shingles can infect a healthy person with the varicella-zoster virus and that person can get chickenpox, that is, contact with the herpes zoster lesions is a way of transmitting the varicella virus, but not the primary way.

The virus is also transmitted by airborne spread of respiratory secretions from a person who has chickenpox.

Chickenpox and shingles are usually more severe in immunosuppressed people than in immunocompetent people.

Chickenpox in these patients can cause life-threatening complications.

The administration of one antiviral agent or another depends on the characteristics of the patient including his or her age.

The virus can infect the placenta of pregnant women who have chickenpox and infect the fetus.

When the infection occurs in the first trimester or early second trimester of pregnancy, the baby may be born with stunted limbs or scars on its limbs.

Chickenpox can cause the death of a baby if the mother has it within five days before to five days after delivery.

There is a chickenpox vaccine that was approved by the Food and Drug Administration (FDA) in March 1995 for use in people at least one year old who have not had chickenpox.

Two FDA-approved vaccines are available for the preventive treatment of shingles.

The first vaccine was approved in 2006, is designated LZV (live zoster vaccine) and it is based on the use of an attenuated active virus. Its commercial name is Zostavax.

The second vaccine was approved in 2017, is designated with the abbreviation RZV (recombinant zoster vaccine) and is composed of a component of the varicella zoster virus and an adjuvant that enhances the body’s immune response. Its trade name is Shingrix.

Several studies[2] show that both vaccines are effective in preventing shingles for up to five years.

This virus is named after British scientists M.A. Epstein and Y.M. Barr who identified viral particles in tissue cells affected by lymphatic cancer in 1964.

The Epstein-Barr virus infects cells of the salivary glands and lymphocytes and is the main cause of infectious mononucleosis, a condition popularly known as kissing disease.

This disease is characterized by the presence of a high number of mononuclear leukocytes in the blood and its main symptoms are fever, sore throat, fatigue and swollen lymph nodes.

Infectious mononucleosis can have recurrences, but these are rare because long-lasting immunity is created after infection.

It is estimated that over 95% of adults are infected with this virus, although many remain asymptomatic.

The Epstein-Barr virus also induces lymphomas of neoplastic character in immunosuppressed patients; it is associated with Burkitt’s lymphoma and undifferentiated rhinopharyngeal carcinoma.

The main way of transmission of the virus is through saliva. That is why infectious mononucleosis is called kissing disease.

The virus is also transmitted in blood transfusions and from mother to child through saliva.

There is no vaccine to create immunity against the Epstein-Barr virus.

Cytomegalovirus is the name of the human herpes virus type 5 since 1960. Its previous name was salivary gland virus because it was first isolated from human salivary glands.

The cells infected by this virus increase in size in a manifest form. The observation of this sign of infection originated the current name of the virus.

This virus also causes infectious mononucleosis, although the fundamental cause of the disease is the Epstein-Barr virus.

Cytomegalovirus is one of the most common viruses affecting HIV-infected persons and organ transplant recipients. It is a member of herpesvirus family that causes a variety of diseases.

AIDS patients are at high risk for cytomegalovirus retinitis, which can cause vision loss within four to six months.

Cytomegalovirus, like other viruses in the family, remains dormant throughout the life of the host; it is lodged in salivary glands, T-lymphocytes, renal epithelial cells, leukocytes and tissues, among others.

The virus is ubiquitous; it is present in urine, saliva, tears, semen and milk.  It is transmitted by direct contact between people and from mother to child before, during and after birth. It is also transmitted through blood transfusions and organ transplants.

There are several strains of the virus and a person can be infected with several of them.

There is no vaccine that immunizes against cytomegalovirus.

This virus was isolated by researchers at the National Cancer Institute of the United States of America in 1986 and two variants are known to exist: A and B, both of which have been isolated from immunosuppressed patients.

It is estimated that human herpes virus type 6 infects almost everyone at an early age.

The virus has been found mainly in saliva and less frequently in blood.

Human herpes virus 6, variant B, is one of the causes of roseola, a condition that affects children under two years of age and whose most prominent symptoms are high fever followed by a transient rash. Fever may be accompanied by seizures in primary infections.

In immunosuppressed people the virus can reactivate and cause hepatitis, pneumonia or encephalitis.

Ganciclovir is an antiviral agent used against human herpes virus 6. There is no vaccine against this virus.

This virus was isolated in 1990 through blood tests, although it is also present in saliva.

It is estimated that an almost majority of the population by the age of five is infected with human herpes virus type 7.

Two variants have been identified in studies; it is known to aggravate mononucleosis caused by cytomegalovirus in organ transplant recipients and may cause roseola and a mononucleoside syndrome.

Human herpes virus type 7 infects salivary glands and CD4 T lymphocytes.  For this reason it is excreted by saliva, one of the ways of contagion.

The most effective antiviral agents against this virus are foscarnet and cidofovir.

This virus was identified in the studies of the oncological disease called Kaposi’s sarcoma that was described by the Hungarian dermatologist Morits Kaposi.

Kaposi’s sarcoma affects adults in Eastern Europe and the Mediterranean and is endemic in the indigenous black population of East Africa.

The disease has also been identified in gay men in the United States of America infected with the HIV-1 virus.

This virus is associated with other neoplastic diseases in HIV-infected patients and is one of the causes of organ transplant failure.

Research on this virus suggests that its transmission ways can be blood, secretions and semen.

If you prefer visual information, watch the video.

Some species of the family infect almost all people and others like the herpes simplex virus are less prevalent, although high.